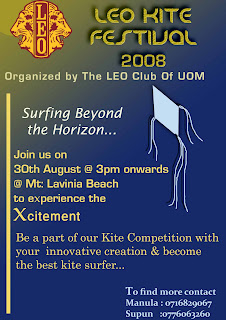 Leo Kite Festival 2008
Organized by Leo Club of University of Moratuwa (District 306 A2)
will be held on 30th August 2008
from 3.00 pm onwards
at Mt. Lavinia beach.
Be Ready for full fun and excitement.
Posted by Unknown at Friday, August 22, 2008 No comments:

It was the time to open the den to new cubs and change the batten over with the sweet memories of joy and triumph from the past year. The Annual LEO Installation Ceremony of LEO Club of UOM was held on 27th July at the Textile Auditorium of The University of Moratuwa. 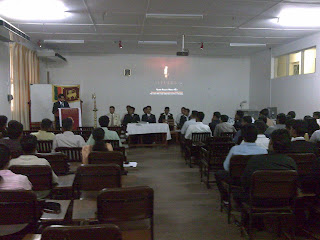 The Guest of Honor for the occasion was the Cabinet Treasurer of Lion District 306 A2 and senior member of the Lions Club of Dehiwala North(parent club) of LION Duminda Munasinghe. Leo Chathura Deshapriya, the newly elected Leo District President of 306 A2 and Past president of Leo Club of Moragahahena was invited as the chief guest. Members of the fellow Leo clubs of the District 306 A2 and Leo club of Colombo host were also among the invited gathering.
The new executive committee with office bearers and board of directors were appointed along with the installation of 6 Leo prospects and 4 Leo members to the club. In his speech the guest of honor expressed his rejoice over the achievements of UOM Leos, while reminding the days of the origination of Leo Club of UOM as one of the founders of the club.Further he urged the Leos of UOM to go forward and accept leadership of the LEO District 306 A2.
Newly appointedExecutive board
President LEO Manula Dharmarathne
Secretary LEO Hansanee Sitinamaluwa
Vice President LEO Sameera Chamara, LEO Ruwan Narampanawa
Treasurer LEO Chalita Gunawardana
Vice Treasurer LEO Dinesha Somasiri
Editor LEO Achala Satharasinghe
Directors
LEO Amila Amarasinghe
LEO Chandana Ranasinghe
LEO Chatura Siriwardana
LEO Dayani Jathunge
LEO Dinusha Somasiri
LEO Duminda De Soyza
LEO Isuru Senadeera
LEO Lasantha Samarakoon
LEO Nalaka Bandara
LEO Namal Samarawikrama
LEO Radeeshan Ranasinghe
LEO Supun Gunasekara
Posted by Unknown at Thursday, August 21, 2008 No comments:

Leo Club of University of Moratuwa - 5 years of Excellence

Five years back a set of undergraduates from University Of Moratuwa joined their hands to form the Leo Club of University of Moratuwa.
In 2003 with the help of Lion Lester Aponso, District Chairman for Leo's of Leo District 306A (2002/2003) and Leo Shyana Wijayaratne, District President of Leo District 306A (2002/2003) and also with the permission of university authority, Leo Club of University of Moratuwa was established in 27th June 2003, as the SECOND university based Leo Club in Sri Lanka and as the FIRST in Leo District 306A. Lions Club of Dehiwala North, a leading Lions Club in District 306A, provided the sponsorship for the club. As the university authority, Dr. Saman Thilakasiri took the challenge of the Patron and Mr. Kithsiri Samarasinghe took the responsibility of Senior Treasurer.
The installation ceremony organized by the parents Lions Club took place on the 27th of July 2003 at Lions Activity Center, Moratuwa. 38 engineering undergraduates were installed as Charter Members of Leo Club of University of Moratuwa on that day.Under the presidency of Leo Nadun Gunawadena and the guidance of uncle Ravi (Lion Ravi Rajapathirana - Leo Advisor) and the help of DP Leo Shehan the club completed its first leoistic year, being the runner-up for the best new club of the district in 25th Annual Leo Conference. Also the project "Api Akurata Meli Nowemu" and "Leo Paduru Sajjaya" took the attention of whole Leo District.
The club has not looked back since that and has continued its expansion and kept increase in services to the university and to the community.
In leoistic year 2004/2005 the club was lead by Leo Mahesh Prasanna Abeywickrama. Unfortunately he left us at an unexpected time.Upon his deceased Leo Chatura Gunawardane took the club and brought it to a greater height. By this time the district was divided in to 2 districts A1&A2 the club was shifted to 306A2.The club was re born with the great leadership of Leo Tharanga Gunasekara. In the inaugural district conference of 036A2 we were awarded 13 project awards 6 individual awards and five district and club awards. We were the most outstanding club in the district.
Since then the Leo club of UOM remains the most outstanding club in the district.The number of awards we achieved in 2nd district conference was 18 that was the result of the leadership provided by Leo Buddhi Hettiarachchi.In leoistic year 2007/2008 under the presidency of Leo Namal Karunarathne the club was again awarded as the best club. We achieved 12 project awards 7 individual awards and 2 district and club awards.
In this moment of celebrating 5th anniversary Leo club of UOM is now enriched with young energetic and enthusiastic set of members.

We are committed to achieve excellence.
Posted by Unknown at Monday, August 18, 2008 No comments:

It is with great pleasure We announce that Leo Club of University of Moratuwa was awarded as the most outstanding Leo club in 3rd Annual Leo District Conferencce 306 A2 held in Excel World Auditorium, Colombo 07. From its begging, members of Leo Club of University of Moratuwa lead to serve the community and this is the 3rd consecutive time we got this award. The club again has showed its excellence performance by achieving the 1st place in the district contest conducted among all the clubs by Leo District Council 306 A2 for Leoistic year 2007/2009. It is clearly reflected by the 10 project awards,2 club awards and 9 individual awards we got in the district conference. We won 21 awards out of total 32 awards given at the Leo District conference. (I have annexed the list of awards at the end) We, Leos of University of Moratuwa are committed to achieve excellence!! 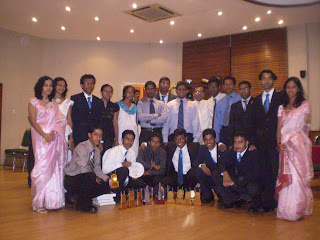